didn't actually feel like going out cause i had the worst back ache and a stomach ache and my head hurt... (just to clarify things: i was not hung over, no clue why everything hurt) but went down the pub anyway, just for a beer or two.

after the first beer (which i drank incredibly slowly, i am capable of learning from my mistakes) dia asked how all my aches were and i found they'd gone! hurray! had another pint and a half before we left. paul had had 4 by then. he kept urging me to get on with it, wasn't pleased when he finished his third pint to find i was only just half way though my second (yay! well done me!!)

took a taxi to town. paul told me neil said i was bright. he said neil said you could give me a problem and i'd go away and solve it! yay!!! so i was ecstatic (oop, took me a while to get that word right, but got there in the end, no x's after all...) needed to do the happy dance, but not the sitting down one (that's just for blocks that synopsys made fast enough and generally code that works). couldn't stand up to do it in the taxi (it was high enough but i refused to take my seatbelt off), so when we stopped at a red light the taxi driver did one for me... it wasn't very good he completely neglectd the arm movements :(

but when we got to town i danced down the street. would have done cartwheels but it was on a hill and might have hurt myself so didn't. (did do them later on the way to the third pub. wow we went to three pubs... but the beaufort doesn't really count so it was only two really)

serrie and alistair met us in the second pub (not a clue what it was called). was good fun. just before we left they played bat ot of hell. i just love meatloaf's music. it's so great. dave'll groan if he reads this. he doesn't like meatlof, he doesn't like springsteen... but he does like some very good stuff, just not all the good stuff ;-)

paul tried on serrie's hat (at least i think it was serrie's not alistair's, bit who knows...): 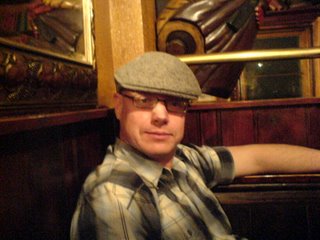 then serrie wore it 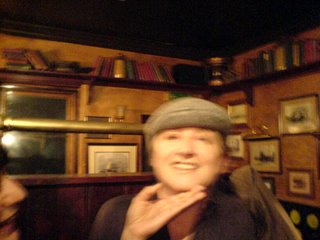 cause of the whole dublin pictures thing i went round asking everyone's permission, whether it was ok to put the pictures on my blog. serrie said the hat one was blurry enough so ok. but i've got another one of her without the hat that's not blurry and i can't remember asking permission for that one. think it was before i realised that might be a good idea. so can't put it on :(

the third pub was fun. had long chat with serrie and alistair. turns out serrie's really nice ;-) she just comes across as scary cause she's assertive (and she like to pretend to be nasty). told alistair about jonesy dying. poor cat. i had my phone out and jonesy's my background and alistair saw it so he got the tale...

serrie also said neil was impressed with me. she's quite surprised at how impressed neil and paul n are. i'm so chuffed. i think they're wrong, somehow i haven't been really thick yet (or rather they never noticed when i was) but i'm still very very pleased. serrie says if i want to be able to come back i need to make sure neil and paul n stay impressed, they're the important ones. oh, and paul h (not sure about how impressed with my cleverness he is. probably shouldn't have beaten him 3 times at arm wrestling. didn't realise :-) ah well) and glenn (to whom i sent a mail saying what an idiot i am, cause i thought i heard the sandwich van, went and stood outside and found nope, i'm hearing things... obviously, the mail wasn't meant for him ;-) meant to send it to stuart)

dia and paul suddenly decided to go get a kebab just after i'd got another round :( i downed my beer (ok, so i am not capable of remembering lessons learnt after i've had five or six beers...) and rushed after them. paul kept saying i'm gonna be sick. i felt it would only be fair punishment if he puked on me, so i carted him to wherever we went.

propped him up against the wall for this picture. it's a bit blurry but we did i fact meet chewy's little brother :-D he was very nice 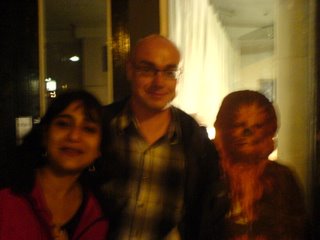 found some place, dia went in to get the food, paul sat down at the curb and i rushed of to find a loo. failed miserably, rushed into this supermarket...? there was asolutely nowhere and i was desperate...

so i went and sat down with paul till dia got back. she was more sccessful at getting a taxi than in dublin, although the first driver took one look at us and sped off. i think paul and i were wobbling a bit too much for his liking...

got back to dia's and had the food. paul's stuff was so hot it burnt layers of skin off your tongue. i tried some and got hiccups. remember telling some long story with hiccups, don't remember what it was though. probably woudn't have been that long if i hadn't had to stop every couple of words to hiccup.

dia's got really lovely cats. they say one of them is nasty, and it did swipe at me once (mostly missed) but in the morning it was really nice and it purred :-) i love cats. the poor other cat that doesn't swipe got cuddled till it ran off in horror :-)

seems dia cannot deal with slugs. she can do spiders and other horrible things, but slugs make her freak out completely. there was a slug on the ceiling in the wash room and dia screamed. paul had already gone off upstairs to get ready for bed and dia was showing me some work that security guard stuart had done for her (he's only a part time security guard, has his own company i think).

anyway, we found the slug and dia ran off yelling for paul. i was going 'no, no, we can deal with this, leave paul alone, it's fine' and she was going 'we can't we can't! it's a slug! paul, PAUL! he-e-elp!!!' was quite funny. i was going 'what am i allowed to use can i use this?' and dia was moaning noooooo :-) it was so funny.

i was going 'i'll use this, i'll use this, i promise i'll wash it really well' but she wouldn't have it. she was so scared i was going to contaminate something that she forgot about getting paul to come save her and found me some paper to use. then she went back to yelling for paul. once i'd got the slug down she couldn't open the back door.

so we went to the front door which she'd locked and it took her ages to get the key off the ring (don't ask me why it was necessary to take it off the ring to open the door, it just was) all the time yelling for paul... finally got the door open so i went out and took the slug to visit the neighbours :-)

then dia couldn't get the key back onto the ring (surprise surprise) and she wouldn't let me put it on, she squealed. by this time paul had come down and was just laughing at us. in the end i stuck the key back in the door so that it wouldn't get lost. it had taken me about five minuted (ok not quite) to get the key out of the lock, it was really stuck and i didn't want to break the key...

in the morning i'm going downstairs and dia's there going 'oh nooo, i've lost the key, i can't find it'. it was still in the door... *pats self on back*

we got out the door to go get dia's car with my bag in it which we'd left at work and i think dia's phone beeped or something. so i realised i didn't have my phone in my pocket... rushed back inside, looked everywhere i'd been, not there! i remembered getting it out at the last pub and leaving it on the table for a while. must have left it there then... so dia says we'll ring it. but she couldn't get her phone to work properly.

got to paul's car just as i'm ringing my phone from paul's phone and i start ringing... ummm, i had put it in a very safe place... do not remember that at all. and i slept on it and didn't even feel it. glad no-one phoned me...

got to go do some washing now and have a bath. i smell...

Glad you had a good night out. Feel much better for getting an early night though.