given up on making it look perfect, will just have to live with the purple frames. have taken a screenshot for future reference. 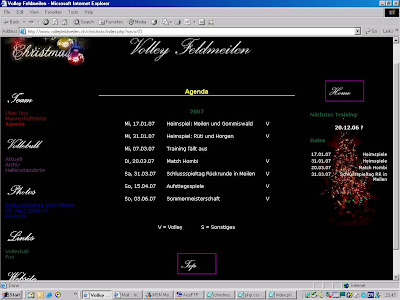 now i just have to get the whole thing up and running properly. ideally this shouldn't take me more than 10 more minutes but my ftp program keeps crashing :-| slowly getting there. (VERY slowly...)

hurrah!!! it's worked! i like it, i don't care if tim (my little (but hugely tall) brother) says it's stupidly festive (or something to that effect), marion likes it too :-) i am well aware that there are way too many bright clashing colours (did a huge project on website usability in my third year at uni) it's christmas, who cares if it's usable. so far only one person has ever decided to come to training based on the website anyway (although one person is still a lot better than nobody!). so there!

went to the tuesday training for the first time tonight (alpha's finished now). it was cool. warming up i managed to get every hit down over the net even though it was men's height. didn't realised i could jump that high! of course once we started playing things went wrong... it was so cool though. there were seven of us in training, five guys, two girls. so this one guy (i should probably know his name, but i'm crap at names) says right us three (pointing at me and mahile, the other woman) against you four (points at the rest of the big scary guys). so i thought 'this is going to be a laugh!' it was!!! we wiped the floor with them in the first and the second set. it was sooo funny :-) they couldn't pick up my serves so that was cool too. the only thing was that i'd done something to my elbow warming up so serving was absolute agony. by the third set a lot of my serves were going wrong cause of it. but all three of us played complete crap anyway, so we were lucky not to have lost 25:5 or something. the fourth and fifth set went similarly badly (although i managed to serve ok again, not that it hurt less). so we lost. but i'm still utterly chuffed that we beat them so well in the first two sets. we never went behind at all in them :-D how funny

my elbow's fine now, what a wonderful painkiller beer is. one small bottle and all the owies go away :-)

btw i realise i seem to brag a lot about my serves. sorry about that. can't help it, they really are worth bragging about. oops, i did it again... ;-)