night in with the neighbours - carnage!

last night karen and andy and the polyp came round for dinner (did i mention that the polyp moved out last weekend?). dinner was fun, although once again everyone was alarmed at me drinking water. i spent the entire afternoon at the pub! i was letting them catch up ;-) of course they kind of overshot the catching up, a lot of wine was flowing.

so karen (who was quite pissed by the end of dinner) decided i needed to catch up. she and the polyp kept mixing me these harmless looking drinks (in pint glasses) which were in fact mainly vodka with a splash of orange juice and a splash of this fizzy-orange-and-vodka mix... three of them they made me, each claiming it was the other who'd tipped in all the vodka! after that the vodka was finished. i remember being given a really yummy dark coloured drink (still the pint glas) which obviously had red wine and martini in it. today i was told that they'd just gone round randomly tipping in whatever drinks were left lying around, so who knows what else was in there! i know, i know, it can't be worse than the infamous white stuff...

anyway between us we seem to have polished off quite a bit of alcohol: the vodka's gone, the martini's gone (i didn't remember starting on the martini till dave and the polyp reminded me, then i remembered the purple drink. can't remember karen spilling two glasses of martini, but you can certainly smell it in the green room. yum!), the fizzy-orange-and-vodka mix is gone, i think they drank five bottles or so of wine, there are innumerable empty beer bottles... i think that's about it, but of course my memory is quite hazy towards the end of the evening.

paul tried on karen's boots. the picture's a bit fuzzy cause karen was waving her arm about so i kept moving the camera... 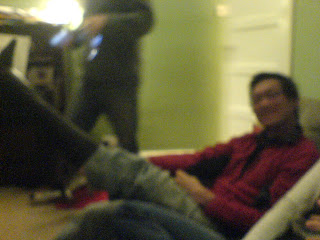 very nice boots, i took a closer picture. sadly he never tried to walk in them. ok, karen would have killed him, he's a size 8, the boots are 4s... 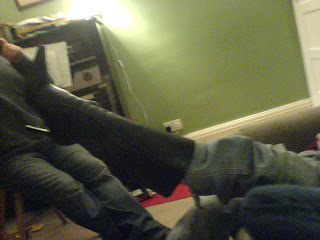 later on marion had a go on karen's boots. they fit her so she stood up and tried to walk in them. that was scary! she swayed and wobbled all over the place, we all had to retract our feet off the floor for fear of having holes stamped in them. in the end i managed to pull marion sideways so she fell back in her chair before she hurt herself or anyone else. i was quite pleased with myself, i even managed to get the phone off the chair just before she landed :-)

karen decided (it was during my first or second yellow drink) we should play truth or dare. so they had to finish off the wine quickly, cause all the empty bottles were in the other room... drunk people's logic :-D it was hilarious! after a while i decided i'd say dare instead of truth, i wanted to be less cowardly than usual. that was a very bad idea seeing as it was karen who'd spun the bottle... so i finished off my vodka and then ran part of the way down the street without my top (did have my bra on!) doing volleyball hits and yelling 'hurrah! hurrah!'. evil karen!!! it was awful, it wasn't even half past eleven yet!

marion fell asleep and was tucked in by karen. or rather karen helped her up the stairs and dropped her on the bed which was how dave found her hours later.

it was quite a long while later when the bottle finally pointed at karen again for the first time since my dare. everyone had been doing truths (although we're not sure that andy was telling us the truth about his number one most embarassing moment ever) after they'd seen what the dares looked like. it was hilarious. but anyway, karen had promised me she'd do a dare as well when she made me run down the street in my bra. she was very lucky that dave had spun the bottle and not me. originally she was supposed to go and lie on the bonnet of paul's car (a very nifty little black sports car) in her underwear and boots and sing auld lang syne. but we had to change that to we wish you a merry christmas cause she didn't know the words. and dave relented and let her keep her top on. and then he let her wear a coat over the top. so i chose the coat: my pink one :-D it's not long at all :-D so she wore it round her arse... i shoved her out the door (like she did to me earlier) and she tottered off to the car. we were wetting ourselves :-D in the end we all forgot about the whole lying on the bonnet thing, but it was funny enough anyway :-D

not long after that karen changed the game: she asked questions and if the answer was yes you had to take a swig of your drink. more hilariousness.