it's been a year and a half since i last used VHDL, i'm used to verilog now. so, looking at a piece of VHDL i get confused: why are there blocking assignments in a block that's clearly not meant to be sequential?! the process is called 'memless'... took me a while to realise that there's no such thing in VHDL, all assignments use the '<=' operator...

hurray, i knew birthdays had to be good for something ;-) (other than presents i mean, of course!)

i finally managed to get up the courage to go and accost one of the VLSI lecturers about doing my final project at the integrated systems lab (IIS). of course it ended up being the wrong one, cause norbert's responsible for the projects and i found hubert first. so i had to send norbert an email anyway, but at least hubert told me what to write and he said the project sounds ok as a master project :-)

hurray, i finally did it! have been moaning about it for over a month now, but i resolved to do it on my birthday and yesterday i told the others at lunch time that i'd do it today. i think the fact that they almost fell off their chairs from laughing too much was a good thing: it made me determined to actually do it ;-)

of course i confuddled myself again first: got in the lift, pressed j (that's the floor the IIS is on) and i was up and away! when the door opened again i got off, as you do. so i went round the offices, wondering why i didn't recognise any names. then i found two i did recognise, from TIK (computer engineering and networks lab). was most alarmed, thought they must have moved... why would they do that?! got half way round before i noticed it was floor g! it says it on every single door! moron me... ah well ;-)

had my first driving lesson in eight or nine months last night. it's absolutely terrifying! who in their right mind would give me the keys to this huge car (ok, it's the smaller of our two, but that's only cause my mum's mad about size and the other one's a removal van) and let me loose on the roads in it?!

am still quite traumatised from last time (yes, even though it was nearly a year ago) when i nearly hit a horse, swerved to avoid it and would have collided head-on with anything coming the other way... but this time there were no horses anywhere. phew!

dad insists that i drive pretty much at the speed limit (thank goodness we stuck to roads with limits of 60km/h or less, going 70km/h is horrible!!!). but there are too many things to concentrate on at once, so i need a safety margin or i keep accidentally going too fast. that would be typical, if i got a speeding ticket! me, who'd prefer to drive along at 30 (km/h!) or so all the time...

i wish i could just say, 'right, i'll ignore the speed for now, just concentrate on where i'm going' or 'i'll ignore rules that say who's got right of way and just concentrate on the rest' but no! there's a hundred and one things i'm supposed to be watching at once! help! i can't multitask properly! thank goodness our cars are automatics...

:-) the first time i made a right turn: completely forgot to indicate, dad's yelling 'indicate! indicate!' so i whack this lever on the right side of the steering wheel and the windscreen wipers go on! opsy! :-D turns out both the right and the left indicators are controlled by the lever on the left side... as i said, it's been a while ;-)

luckily we both survived and so did everything else along the way, although i think dad might have some more grey hair now and i scared some bollards half to death ;-) oh yes, there was a marten, which saw me coming and decided not to cross the road and a cat which thought it'd make for a good adrenalin rush if it darted across the road right in front of me. of course i panicked, lifted my feet and went 'aaaahhh! suicide cat!'... by the time i thought to brake there was no longer any point, the cat had made it safely to the other side. nasty, suicidal kitty!

got home at midnight (couldn't face walking home and haven't got the money for a taxi so i had to get the train). dad was just going to bed, so i asked him whether he'd remembered nanny's birthday. surprise, surprise... ah well

yang's party was good. the ice cream cake was hilarious. it was packed in dry ice and frozen completely solid. now yang's part of the microbiology (or some such) lab. so this bunch of scientists was trying to ... (what's the word? cut doesn't quite fit) the cake. the bread knife was rejected when it barely scratched the cake, rejected in favour of the saw... a big, scary looking, slightly rusty saw... but that failed too :-) the cake was stronger! even when the saw was used as a pick and hammered down into (or not) the cake (although they couldn't find the hammer, can't remember what was used). finally the cake was defeated by this oddly shaped implement someone fetched from the lab. turned out afterwards it was a gel knife (or gel something anyway) which is used to pry slides apart, not really something you want anywhere near your food... luckily we didn't know that before we ate the cake ;-) and the guy it belonged to said 'i washed it! i even used soap!'

two of yang's friends from the states came over and the one of them got tipsy on one sip of champagne. asians... ;-) the swiss girl who got very tipsy (not quite drunk) after a small bottle of beer was also very entertaining :-)

one of the girls videoed the attack on the cake and she's going to put it on youtube when she gets back to the states. she'll have to edit it first though since no-one'll going to sit through the whole thing, half the people had left by the time the first piece was cut even when there was a chance of ice cream... :-)

it's ascension day tomorrow (40 days after easter, the day jesus ascended to heaven...) which is a bank holiday here in switzerland :-D oh no! i've just realised what i've done! i've made a date to go and work on the compiler course work tomorrow morning at 9! on a bank holiday! gah!

ah well. anyway today's yang's birthday, she's having a barbeque. we're starting in an hour and a half, having cake (she's got a chocolate icecream cake from sprüngli) and then we're having beer and wienerli :-) unusual order, but as she says 'it's my party...'

it's my grandmother's birthday as well today. wish i knew which one ;-) [not which grandmother, which birthday, ie how old is she now...] not too ashamed about it though, cause she always refuses to tell us and my dad (her son!) doesn't even knwo... i wonder if he remembered it was today ;-)

tim had his second driving exam yesterday. so far i haven't seen him since. hope he doesn't get too agressive over it. he kept getting soooooo angry whenever we said 'if tim passes his test on tuesday'... and now he hasn't... oh dear.

the best thing i can say about it: it's over...

quite a few of my answers reminded me of this 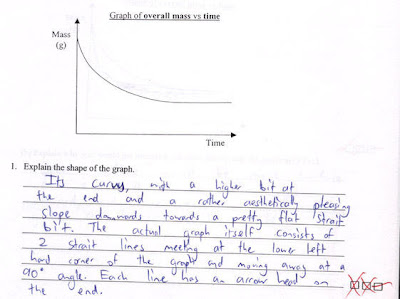 one of the answers was more along the lines of 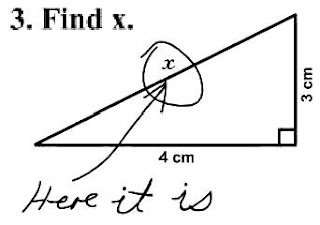 got an exam in half an hour on sustainabilty, environmental science, environmental economics (?), risk and goodness knows what else. craaaaap! would probably have been a good idea to actually attend some of the lectures. since tuesday i've printed a ton of stuff (very eco-friendly...). unusaully for me, i've actually read it as well ;-) but it wasn't very helpful, other than strengthening my conviction that there's no way i'm going to pass this stupid exam. ah well...

i turned up an hour and a half early so that i could go over the stuff again beforehand, but i can't face reading that crap again. it all just says the same thing. i hope i can bs my way through this. how embarrassing would it be if i had to repeat this block!!!


The European Commission has just announced an agreement whereby English will be the official language of the European Union rather than German, which was the other possibility.

As part of the negotiations, the British Government conceded that English spelling had some room for improvement and has accepted a 5- year phase-in plan that would become known as "Euro-English".

In the first year, "s" will replace the soft "c". Sertainly, this will make the sivil servants jump with joy. The hard "c" will be dropped in favour of "k". This should klear up konfusion, and keyboards kan have one less letter.

There will be growing publik enthusiasm in the sekond year when the troublesome "ph" will be replaced with "f". This will make words like fotograf 20% shorter.

In the 3rd year, publik akseptanse of the new spelling kan be expekted to reach the stage where more komplikated changes are possible. Governments will enkourage the removal of double letters which have always ben a deterent to akurate speling. Also, al wil agre that the horibl mes of the silent "e" in the languag is disgrasful and it should go away.

By the 4th yer people wil be reseptiv to steps such as replasing "th" with "z" and "w" with "v". During ze fifz yer, ze unesesary "o" kan be dropd from vords kontaining "ou" and after ziz fifz yer, ve vil hav a reil sensibl riten styl. Zer vil be no mor trubl or difikultis and evrivun vil find it ezi tu understand ech oza. Ze drem of a united urop vil finali kum tru.

some biology postdoc is giving the course. he's currently explaining how to MAKE THE TEXT BOLD!!! aaaaaaaaaaaaahhhh!!! they have got to be kidding! morons...

did you know that the first of may is a bank holiday in switzerland? or rather, in zurich... :-) so i had a good day yesterday. got a little bit burnt hanging around playing beach volleyball, it was like being on holiday :-D

got a stupid excel course in 15 minutes. meh. but i thought, since it's free and last time i had to use excel i failed miserably, it couldn't hurt too much... problem is most of the participants tend to be pharmacists and forestry students who need help finding the power button... ah well ;-)

went to the hairdresser this afternoon. i hate that almost as much as going to the doctor. might have mentioned that last time i went, back in november. now i'm covered in tiny hair fragments, horribly itchy!